Our Jungle in Willunga –  a tropical oasis in SA

Our Jungle in Willunga was created over 25 years ago and is a living example of a tropical oasis right here in SA. There is a palm forest, a cycad garden and a bamboo collection all linked by walkways. There’s also water features, ferns, clivias and flowering camellias and wisteria. As part of our commitment to HELP SAVE THE MURRAY, we recycle 100% of our run off water aiming to make our display gardens self-sufficient. It is a place to relax and marvel at what can be achieved in the driest state on the driest continent on Earth.

The garden started with a windbreak of Eucalypts and bottlebrush on the southern boundary in 1988, then large trees and Cocos palms were added. As the shade developed, smaller palms such as Bangalow, Dwarf Date, Windmill and Kentias were planted. A Cycad collection was established at the western entry, followed by a selection of more unusual palms (Bamboo, Parlour, Livistonia, Sabal). Tree ferns were scattered through the garden but the drought took its toll, with only a few remaining. Most recently, clumping bamboo from China and Japan was added with an Oriental section including a Wisteria walkway and Japanese Maples. There is a very impressive clump of Ghost Bamboo and a beautiful windbreak of Australia’s most popular bamboo, Gracilis. Since 2014, we have been focusing on adding to our bamboo collection and enriching the understorey with cannas and bromeliads.

“The Jungle in Willunga is much more than a plant nursery. It’s a place to be inspired and enthused, as well as a chance to see how your green sanctuary will look in 20 years’ time”. 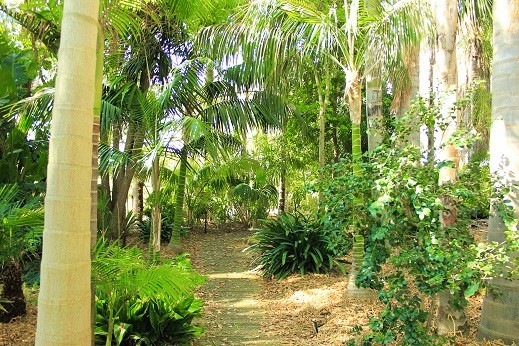